SD and CF memory card ratings and symbols demystified?! That looks and sounds complicated! But wait. Let’s take a look at what markings on my memory card are all about. It’s pretty simple, actually.

While at first glance this a really complex, the truth is that it all pretty much boils down to (besides the storage capacity [“size”] of the card) how fast the card will perform.
This article addresses only SD and CF card types, which are the vast majority of cards in use in digital cameras. For the sake of getting the basics out of the way, “SD” stands for Secure Digital for and “CF” is for Compact Flash. There are at least two other card types in less common uses, XQD and CFast (standing for CompactFast). Generally speaking, users of these more unique speciality cards are aware of their use and features. For more info on these, consult your favorite search engine.
SD card markings are more complicated than CF cards, so let’s get the harder part done first, shall we? 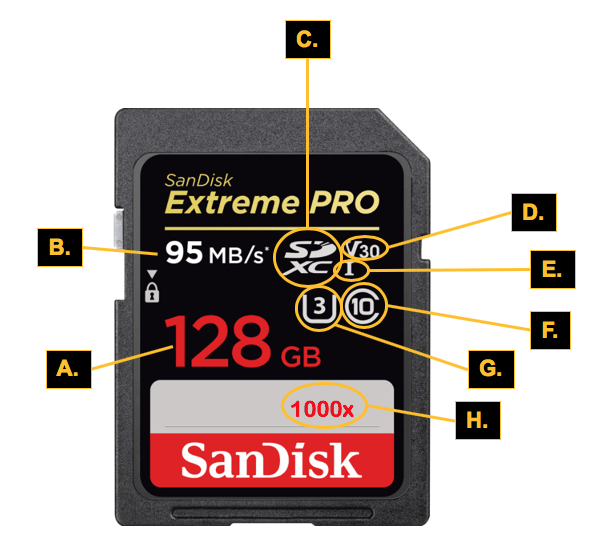 A. The card’s storage capacity. In megabytes (MB)

B. The read speed, in actual MB/s (megabytes per second).

It’s very important to note that the read speed is how fast your computer will read the data that has been written to your card and will always be faster than the write speed. With low-end cards, there can be a huge differential between read and write speed. With faster cards, the difference is still there but can far less.

E. UHS Bus speed* I, II, or III. The higher the Roman numeral, the faster the card.

H. (You may or may not have this marking on your card)

The “600x” or “1000x” or ####x rating is based on the very outdated comparison of read speed to a 90’s vintage CD-ROM (if you even know what this is/was!). This number can, however, be used as a relative comparison, such as knowing/assuming (somewhat obviously) that a 1200x card can read twice as fast as a 600x card.
Some of these ratings are redundant, perhaps needlessly overly complicated, at least for the average user. For example, there are three different speed ratings, “Speed Class”, “UHS Speed Class”, and “Video Speed Class”. These ratings cover different ranges but as one increases the associated other ratings will increase, too. If you’re technically inclined, you can read more from the SD Association here.

As time goes on, it would not be surprising that new, even higher rating classes will be added to this list. 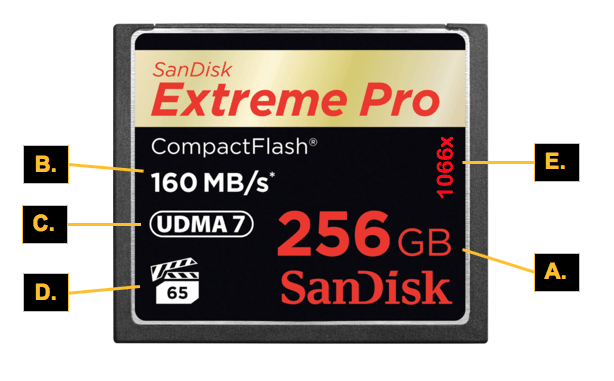 A. The card’s storage capacity. In megabytes (MB)

B. The read speed, in actual MB/s (megabytes per second).

It’s very important to note that the read speed is how fast your computer will read the data that has been written to your card and will always be faster than the write speed.

The higher the rating here, the overall higher performance. These are ranges and will always coincide with read speed.

D. This is the minimum write speed of the card, in MB/second.

It’s important to note that this is the sustained write speed, vs. a peak speed.

E. (You may or may not have this marking on your card)

This Tech Tuesday post is about demystifying SD and CF memory card ratings and symbols that Russ and Liz Caron, Maine wedding photographers, use in their wedding photography business. Do you have questions, or recommendations for the Tech Tuesday series? Let us know in the comments! And don’t forget to share this post with your friends. Russell Caron is available for workshops, group instruction, or one-on-one mentoring. Call Russ at (207)233-4050, or email him at russ@wed-pix.com.