December 2021: Time for an update to this time saving memory card import process post! The process hasn’t changed, but the availability of the hardware has. Not to worry, the replacement system works as well, or better, than the original! Read on! 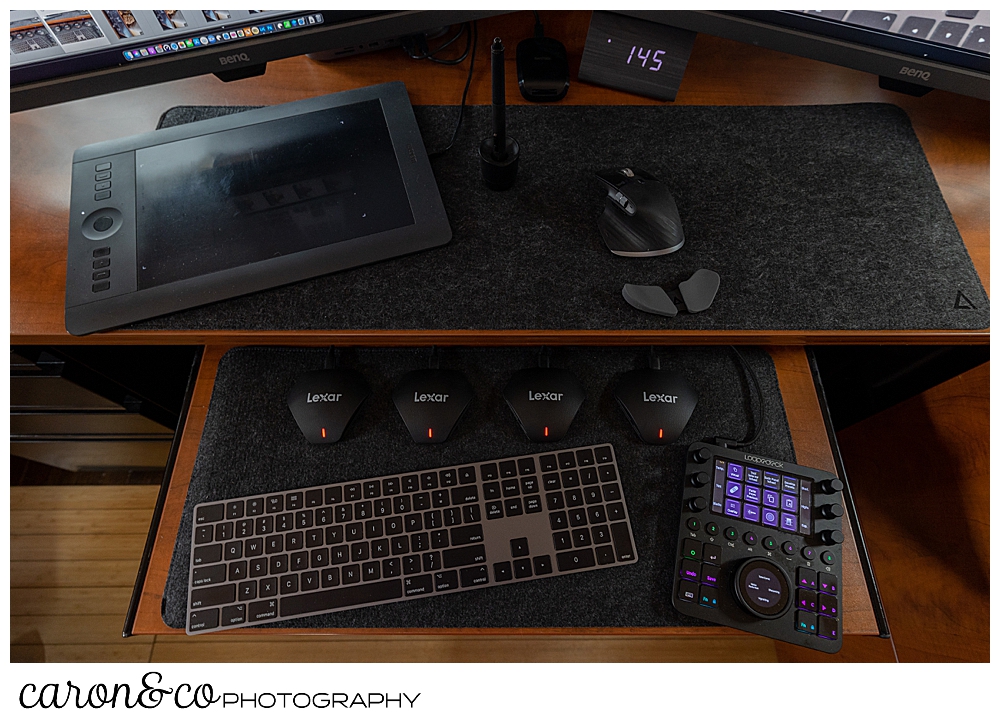 To emphasize, the workflow/process in the original post has not changed. The hardware, however, has. This is because the Lexar hubs as shown and described in the original post are no longer available. But the readily-available Lexar Professional Multi-Card 3-in-1 USB 3.0 Reader works the same way! Actually, any USB 3.0 speed card readers should work. We have four but fewer, or more (to a point) will work the same way. Actually we have a fifth reader, to the left of the digital clock on the top shelf. This one’s for CF-Express cards. 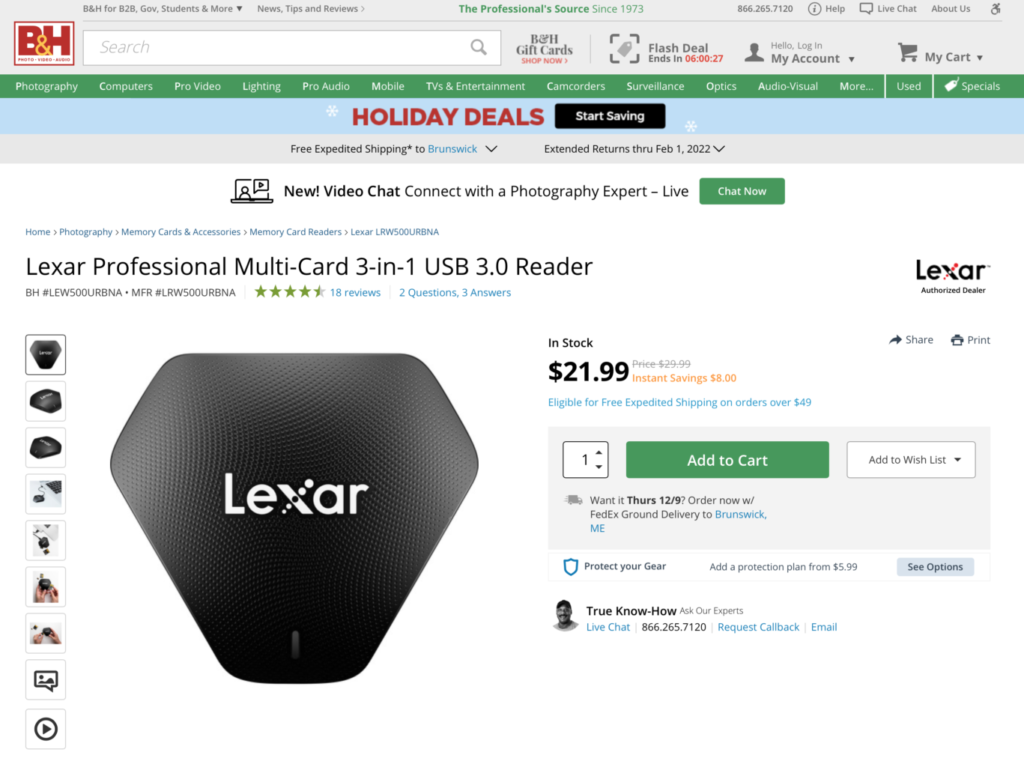 Above: the card reader we recommend and use. Each of these readers has three slots; one SD; one micro-SD, and one CF.  They run at USB 3.0 speed, and have USB C connection at one end and USB-A at the other end of the supplied cables. We chose to feed these into a powered USB 3.0 hub as suggested below. 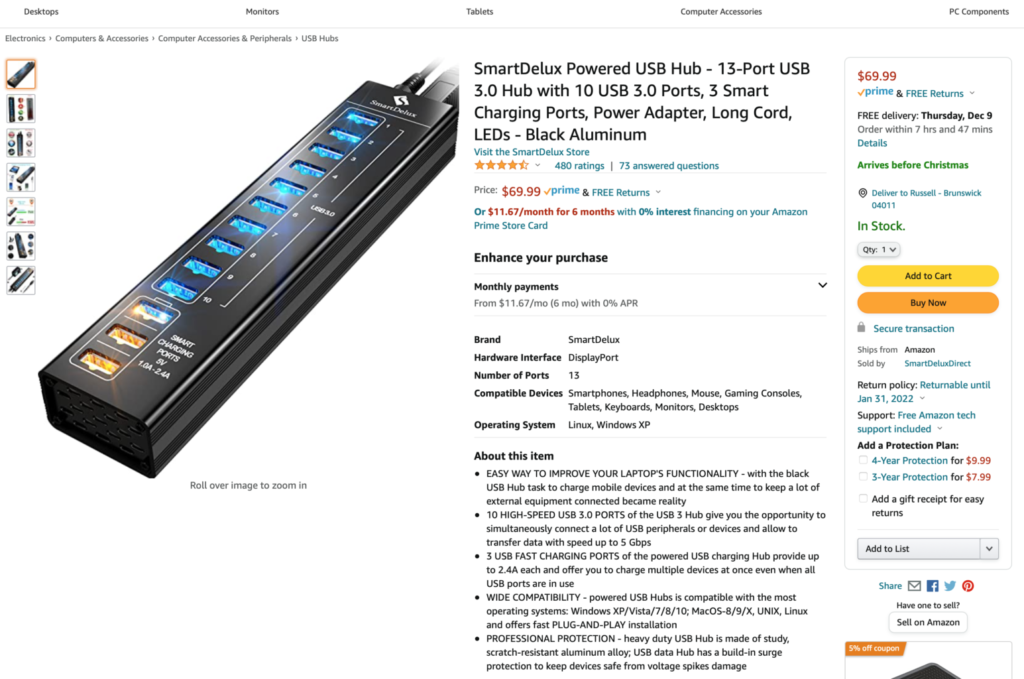 Just plug your readers into the powered USB hub and in turn plug the hub into your computer. Then, go the the “A Workaround’ section of the original post below to import however many cards you have inserted into your readers all at once into Lightroom!

It wasn’t long ago that coming in from a wedding late Saturday night, or often even Sunday morning, meant there was a stack (sometimes as many as 16) of memory cards to import and back up. These cards were generally, at the time, 8GB size. Using an external card reader, which connected via USB 2.0, was pretty much state-of-the-art. This meant waiting as much as 20 minutes for a nearly full card to transfer, then on to the next one. I recall being exhausted at the end of a 16-hour day and napping while each card downloaded. Doing the math here it quickly becomes apparent that downloading these cards was an arduous, long-duration task. We day-dreamed of a time saving memory card import process…

We know there are as many ways to run imports as there are photographers, and that different software applications have differing capabilities. So we disclaim here that this is what we do, and what works for us. And while we’re at it, another disclaimer: we have no affiliation with the products or services mentioned here, other than the fact that we’re loyal users! What is indisputable, though, is that we now do in 10 or 12 minutes what used to take virtually half the night (or morning). Say hello to our time saving memory card import process:

There are three main things that have come together to make downloading a joy rather than anguish.

We routinely shoot on 64GB cards with 64GB internal camera back up for safety). We now come home with no more than four cards to download, no matter how long of a day shooting. This eliminates having to swap out cards in the reader.

USB 3.0 is MUCH faster than USB 2.0. On paper, ten times faster. In reality, with hardware considerations and other factors, it may not be quite that much but it is indeed notably MUCH faster.

Seen here is the Lexar Professional Workflow HR1 4-bay USB 3.0 Reader Hub (part # LRWHR1RBNA) equipped with four readers. The hub is the empty tower, ready for you to customize its four slots with your choice of readers. Since I know you’re wondering, the cost of the empty hub is about $50 and about $20 for each of the readers. CFast readers, miniature hard drives, and micro SD readers to fit in the hub are also available at differing pricing. The system is also available with Thunderbolt connection. Keep in mind that the overall system speed is limited by the weakest (i.e. slowest) component, that being the cards themselves. For us, USB 3.0 was perfect and we knew we wanted one SD slot and three CF slots. This unit lets the four readers connect to your Mac or PC using just one cable. But the advantages don’t stop there.

Many of us use Lightroom as the center of our digital workflow universe, myself included. The fly in the ointment here is that Lightroom still sees, even with the one cable connection, each reader as a separate drive. Which means it will not “daisy chain” from one to the next as each card is read and downloaded. Well, not at first glance, but wait. There is a solution:

There is a nifty little, and largely unknown, workaround. Whereas you would customarily select the ‘Devices’ area of Source during import, notice in the screen shot at left the fact that Lightroom is seeing four ‘EOS_DIGITAL” cards connected. As mentioned above, Lightroom isn’t programmed to move from one card to next as one could or may hope. Using the Devices are to source the files would require the user to select one, let it import, then repeat manually for the subsequent three drives. This would largely be missing the point of having the Lexar hub.

However, there is a nifty little trick to make Lightroom see the combined files from all four connected devices at once.

Highlight the folders of each drive that contain the to-be-imported files using the ‘Files’ (instead of Devices) area as shown on the screen shot at left. Just hold down Command or Control and select the multiple sources. You’ll see the file count in the bottom strip become an aggregate total of what’s contained on all the cards.

Then, just proceed with the rest of your import as normal.

Voila! In just a few minutes every card is uploaded with no further interaction from the user.

We even use the ‘Make a Second Copy to’ feature to, right at the front of the process, copy a second set of files to our IoSafe waterproof-fireproof hard drive vault (also USB 3.0) at nary a reduction in speed.

We are, with this system, uploading and backing up for an average wedding about 2,200 files in about 10 minutes with absolutely no human interface needed once we do the above and hit ‘Import’.

This Technical Tuesdays post is about the time saving memory card import process that Russ and Liz Caron, Maine wedding photographers, use to download their wedding photographs. Do you have questions, or recommendations for the Technical Tuesday series? Let us know in the comments! And don’t forget to share this post with your friends. Russell Caron is available for workshops, group instruction, or one-on-one mentoring. Call Russ at (207)233-4050, or email him at russ@wed-pix.com.