As a new DSLR owner, congratulations are in order! Photography 101 for new DSLR owners will be a multi-part primer series for anyone wanting to better understand their cameras and gear before going too much further with their photography hobby.

In this, our first post in photography 101 for new DSLR owners, we’ll talk about DSLR cameras, full and cropped frame bodies, and what it all means. What lies ahead is all in your control, where you take this is all up to you. You think (or know!) that you’re going to want to learn a little more about photography, experiment with lighting, the controls on your camera, and someday (soon, even?) maybe you’ll purchase some additional lenses for your new camera, but wow, where to start with all this? There are many options, of course, but we’ve put these posts together for you with the hopes of helping steer you in the right direction. Let’s chat first about a few basics. Since we want this article to be friendly to beginners and new-comers, we want to touch on a couple of things without trying to take the place of actual photographic instruction.

Definitions:
A DSLR is a digital single-lens-reflex camera. Typical models that this article is intended to address are consumer models that come from Canon, and Nikon. Canon models owned by readers of this post will likely include the Canon Rebel series, the 70D or perhaps 7D. (I wish I could point out the logic of what Canon’s numbering scheme is, but, well, I’m not sure even Canon can do that.) Nikon models people often start out with typically would begin with D and then have some 4-digit number after. The concept of a single lens reflex camera is that the same lens that is going to be used to make the image is what you’ll be seeing the image through in your viewfinder or on the screen on the back of your camera, i.e., what you see is pretty much exactly what your camera’s sensor will see when you press the shutter and take the photograph.

Because our next installment is going to delve into the wide and wonderful world of lenses, there is an important technical topic we need to go over in photography 101 for new DSLR owners, and that is “what type is the sensor inside of your DSLR body…i.e., is it ‘full frame’ or is it ‘cropped’?”

SENSOR SIZE: This is technical sounding, but it’s important. If you already know about how sensor size affects the image, please skip this section. If not, please stay. In later articles we will speak about lenses in terms of focal length, as measured in millimeters (mm) and how that lens “acts differently” based on which of two popular sensor sizes in cameras you have: (a) “APS-C” (aka “cropped”) sensors are found in most consumer and mid-level DSLRs and (b) full-frame sensors as found in camera manufacturer’s higher and top end as well as professional camera bodies. Why this matters is that the amount each sensor “sees” from the same lens is different.

Let’s start by talking about the sensor: it’s the part inside your camera that “sees” and makes the digital file from the image your camera and lens project onto it. It does what film used to do. A “full-frame” sensor is called that because it is fully the same size as is a frame of 35mm film: 24mm x 36mm.  An “APS-C” sensor is smaller, as shown in the diagram that follows. To make matters just a tad more confusing than they may already have been, Nikon and Canon each have a different (albeit very similar) size definition for their APS-C sensors. There’s a third sensor size becoming very popular, the “micro 4/3rds” sensor found in many of today’s “mirrorless” cameras.  For simplicity, however, this article isn’t going to specifically address the micro 4/3rds cameras, but the principles in this series are largely going to be the same. 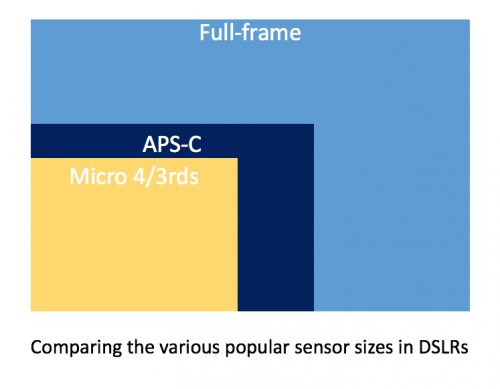 Why do I need to know this? As you grow in photography a real fundamental is to be well-versed in lens focal length. The same exact lens set the same way on a cropped sensor camera and on a full-frame camera are going to necessarily produce two very different looks.

We’ll figure out which sensor you have in a minute (there’s a condensed list at the end), but in the meantime, let’s get our heads around the following thinking:

CAMERA MANUFACTURERS ADDRESS THIS (TO AN EXTENT)
It’s acknowledged that camera manufacturers, Nikon and Canon specifically, have addressed this to some extent, making specific lenses for the cropped sensor cameras that don’t “waste” the projection of the outer edges that the sensor doesn’t see. Canon owners will want to note that “EF-S” lenses only will work on Canon cameras that have a cropped sensor while “EF” lenses work on both types of camera sensor size bodies (with the aforementioned crop factor, of course). Nikon differentiates their lenses with “DX” series lenses for their cropped sensor cameras and “FX” series for full-frame cameras. Oh, if only the first DSLR cameras just stuck with a sensor that matched 35mm size (i.e. ‘full-frame’) all of this technical confusion wouldn’t have ever occurred.

So, you are saying, “I will just stick with the lens type that matches my camera”. Well, that will be fine, maybe for good, but maybe not. First, it is still important to understand why your friend with a 24mm lens on their full frame camera gets such a breathtakingly wide angle of view but when you set to what would seem to be the same 24mm setting on your cropped frame sensor camera you have a much less dramatic view. But here’s the kicker: the lens series made for the cropped camera bodies are generally not going to satisfy your desire for lenses that are the “fastest” (with wide apertures for use in very low light), the sharpest, or built to “professional grade”.

THE BOTTOM LINE
If you plan to grow with your photography, it’s recommended you avoid buying the lenses that only work with cropped sensor cameras because (a) you likely will want to someday upgrade to a full-frame sensor camera and you don’t want to have to re-purchase a new collection of lenses to do so and (b) you are going to want lenses those lenses (that are fast, rugged, and the sharpest) eventually anyhow.

NEXT
Our next installment in the photography 101 for new DSLR owners, we’ll talk about all the lens choices you have!

Look for our next post in the photography 101 for new DSLR owners series about lenses, coming soon!

This Technical Tuesdays post, photography 101 for new DSLR owners, will be a multi-part primer series for anyone wanting to better understand their cameras and gear before going too much further with their photography hobby. Do you have questions, or recommendations for the Technical Tuesday series? Let us know in the comments! And don’t forget to share this post with your friends. Russell Caron is available for workshops, group instruction, or one-on-one mentoring. Call Russ at (207)233-4050, or email him at russ@wed-pix.com.