Mac Studio M1 Ultra! In 2019, Apple introduced the M1 processor. It set new standards from day one. Eventually the M1Pro and the M1 Max variants were added. Which further increased the capabilities of Apple’s new silicon. Rumors were that Apple would introduce a new MacMini with the M1 Pro and Max chip options at their March 8, 2022 first quarter product announcement. Apple did this one better, rolling out the Mac Studio, aimed squarely at creatives like photographers. 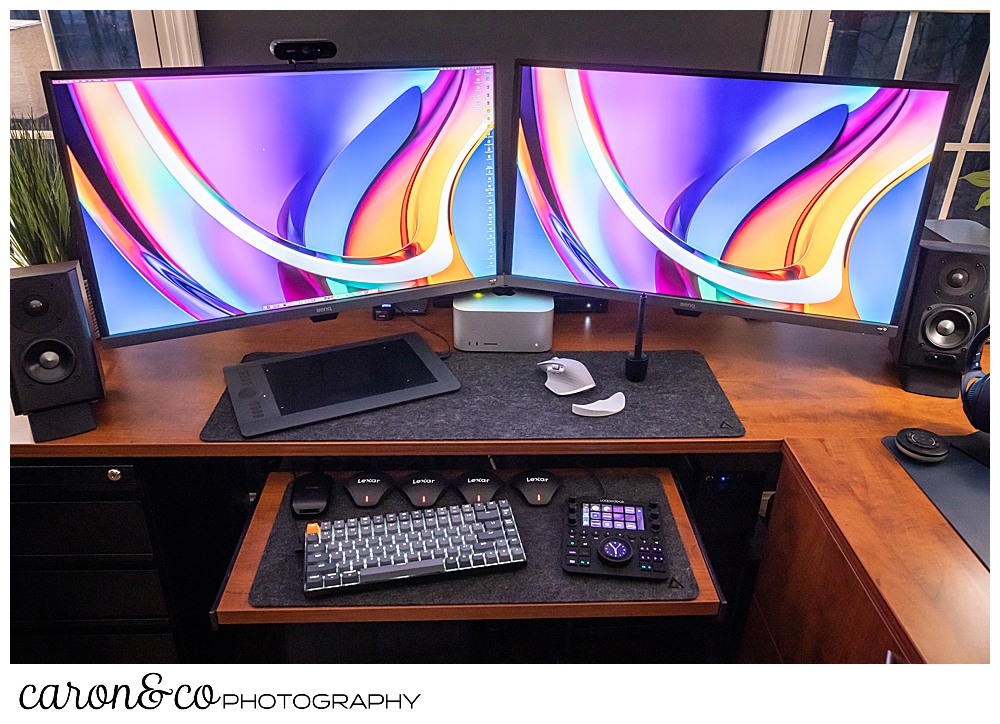 (Above) Our new photo processing Mac Studio workstation. There’s more detail about what all this is below. (Lots of components are not visible in this photo).

Not only would the new Mac Studio offer the M1 Max chip, Apple also made it available with a new M1 Ultra chip; in essence TWO M1 Max chips fused into one CPU. And, with extreme amounts of RAM and SSD storage, too!  Within minutes we had an M1 Ultra, with the standard 64GB RAM and 1TB SSD, ordered. And, it’s here now.

(Above) A graphical look at our entire photo processing work setup.

Caveat: Unlike the iMac, buying the Mac Studio is a component-by-component process. Nothing is included with the unit beside a power cable. You’ll need a monitor or two, a keyboard, mouse, and you’ll want external hard drives for data storage. Not to mention all the proper cables, using Thunderbolt 4 wherever you can for top performance. This is a positive for anyone who likes to choose all their components individually.

With all the power this system offers, is it overkill? For some – or maybe even many – yes. The base Mac Studio with M1 Max chip is still more power than most will often use. But for those whose work frequently demands serious processing power, this new setup is perfect. As in business, time is money.

Remember, though, not every step along the way is going to see improvement like this, or any improvement at all, in some cases. Why not? Some processes are inevitably running only as fast as their weakest link. One example is the import time from an SD card reader. Even at its fastest, this data flow is slow enough a high power CPU is simply unneeded.

Comparing the investment in the new Mac Studio, the “base” model is $1,999 and includes the M1 Max processor. The other new Mac Studio option has the M1 Ultra chip and costs $3,999. But, the difference isn’t really $2,000. This is because the Ultra model upgrades the RAM from 32GB to 64GB, (=$400), and the SSD goes from 500GB to 1TB, (=$200). So, the net difference is actually $1,400. But again, not exactly. That’s because there are other upgrades to the Ultra, such as the 2 front ports being Thunderbolt 4 instead of USB C as on the base model. And the heat sink inside goes from aluminum to copper.

All this adds to the confusion in making a selection, as for many people the “base” Mac Studio (or even an M1-based Mac mini) will be more than sufficient and will well outperform current setups.

We chose to be “safe” and get the Mac Studio M1 Ultra. And it’s not been a disappointment in any way.

Maine wedding photographers, Russell and Liz Caron, are formerly Russell Caron Wedding Photography. We're a husband and wife wedding photography team, who also happen to be tech geeks! Follow along with us as we occasionally post helpful technical posts, such as this one on the Mac Studio M1 Ultra, workstation for photographers. For more information, please contact us right away!